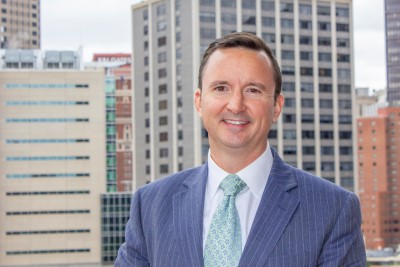 Prior to forming CSP, George served as chief lobbyist to the Organization for International Investment and as chief of staff to U.S. Representative Charles W. Dent (R-PA). George spent five years as director of Federal Government Affairs for the American Financial Services Association (AFSA), a national trade association representing the consumer credit and finance industry, and on the staff of U.S. Senator Rick Santorum (R-PA).

A commissioned officer in the U.S. Navy Reserve, Lt. Cmdr. McElwee is a public affairs officer assigned to the Navy Office of Community Outreach (NAVCO). Among other training and schooling, George holds a Master of Arts in Strategic Security Studies from National Defense University and a Bachelor of Arts in Political Science from Shippensburg University.

Harbach begins his fourth term as a trustee, and currently serves as vice chair. Harbach has worked in both public and private industry. Since 2006, he has served as director of communications of the Pennsylvania Gaming Control Board where he is responsible for media and public relations, along with ensuring that the board’s business in overseeing legal gambling in Pennsylvania is visible to the citizens of the Commonwealth. Doug holds a Bachelor of Science in Communications from Shippensburg University.

Grell begins his fifth consecutive term as trustee, serving on the council since 1995. He served as deputy counsel to Governor Tom Ridge and then as Solicitor of Hampden Township before being elected to the PA House of Representatives in 2004. He dutifully represented the 87thdistrict until 2015, when Grell became executive director of the Public School Employees’ Retirement System (PSERS). Grell earned a Bachelor of Arts degree from The Johns Hopkins University in 1978, as well as his J.D. from the Dickinson School of Law in 1981.