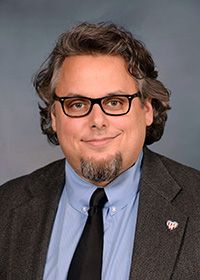 Prior to his arrival at Ship, Dr. Lichtman taught as a visiting professor at several different schools, including Boston University, Dickinson College, and the University of Vermont. A self-described "recovering lawyer," Dr. Lichtman's research focuses on American constitutional law and judicial behavior. His work has appeared in the Maryland Law Review, the Penn State Law Review, Vingtième Siècle Revue d'Histoire, and the newsletter of the Law and Courts section of the American Political Science Association. In 2014, Dr. Lichtman will serve as the Program Chair for the annual meeting of the New England Political Science Association (a role he also played in 2012).

He is also the Pre-Law Advisor, and invites any students who are considering law school to come to his pre-law office hours, and to check out the many resources available on the Pre-Law page of the Political Science department's website. Dr. Lichtman's article on law schools and the job market was recently published in the January-February 2012 issue of the Pennsylvania Lawyer, and he served as the Treasurer for the Northeast Association of Pre-Law Advisors in 2012-2013.

While an undergraduate at Brandeis University, Dr. Lichtman co-founded a sketch comedy troupe, and he rejoined that troupe for a couple of years when he returned to Brandeis to pursue his doctorate. He is also an enthusiastic -- but not necessarily talented -- pool player, and plays in a weekly A.P.A. league in Frederick, Maryland.