There are many different ways that students get involved with projects while in the Department of Computer Science & Engineering. While many projects are individual projects developed by a single student, some are class projects or group projects managed by one of our clubs.

Many student in all of our majors have internships that they may or may not use for credit.  Here are some examples:

John Bucher, a senior computer science major, just recently completed an internship with Computer Aid Inc (CAI).  John describes CAI (www.compaid.com) as  “a global IT services firm that manages engagements with government agencies and Fortune 1000 companies.  CAI headquarters are located in Allentown, PA but they also have an office in Harrisburg, PA.  CAI specializes in providing development and maintenance of projects for companies with limited or nonexistent IT development teams of their own.”   In his time there some of the things he learned about and utilized: C#, ASP.NET, HTML, Databases, CSS, AJAX, JQuery, Javascript, and Unit Testing.  During the internship John worked on two different applications being developed by CAI.  He noted that “the projects provided a hands-on learning experience with industry level software while also enabling interactions with professional developers.”

Derek Belsky and Sunggun Kim have ongoing internships with Volvo Construction.  They are working on the software development team that develop the software for Volvo's pavers and compactors.

Shippensburg University had a strong presence at PACISE 2017 with a team competing in the robotics competition and four student posters and one student paper presentation.  Evan Schoenberger's presentation of his poster on his video game LEVELS won 3rd place.  He developed the video game as a member of the video game development club, which was available to play at PACISE.  Elizabeth Ostrow, Aaron Gerber, and Nahesha Paulection presented posters as well. 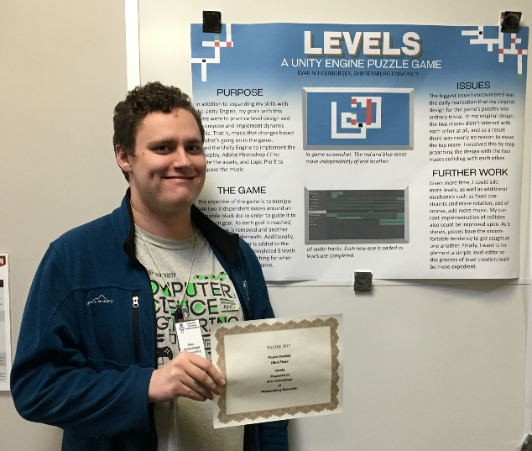 Michael Foreman and Nathaniel Manning worked together to construct and program an EV3 Lego Robot for the first Robotics' competition held at PACISE 2017.  Their robot had to navigate two different line courses and one maze.  Their robot successfully completed each of the line courses (had to complete two full laps) and came in second in the maze course.  Their robot performed in the top three, earning them and honorable mention. 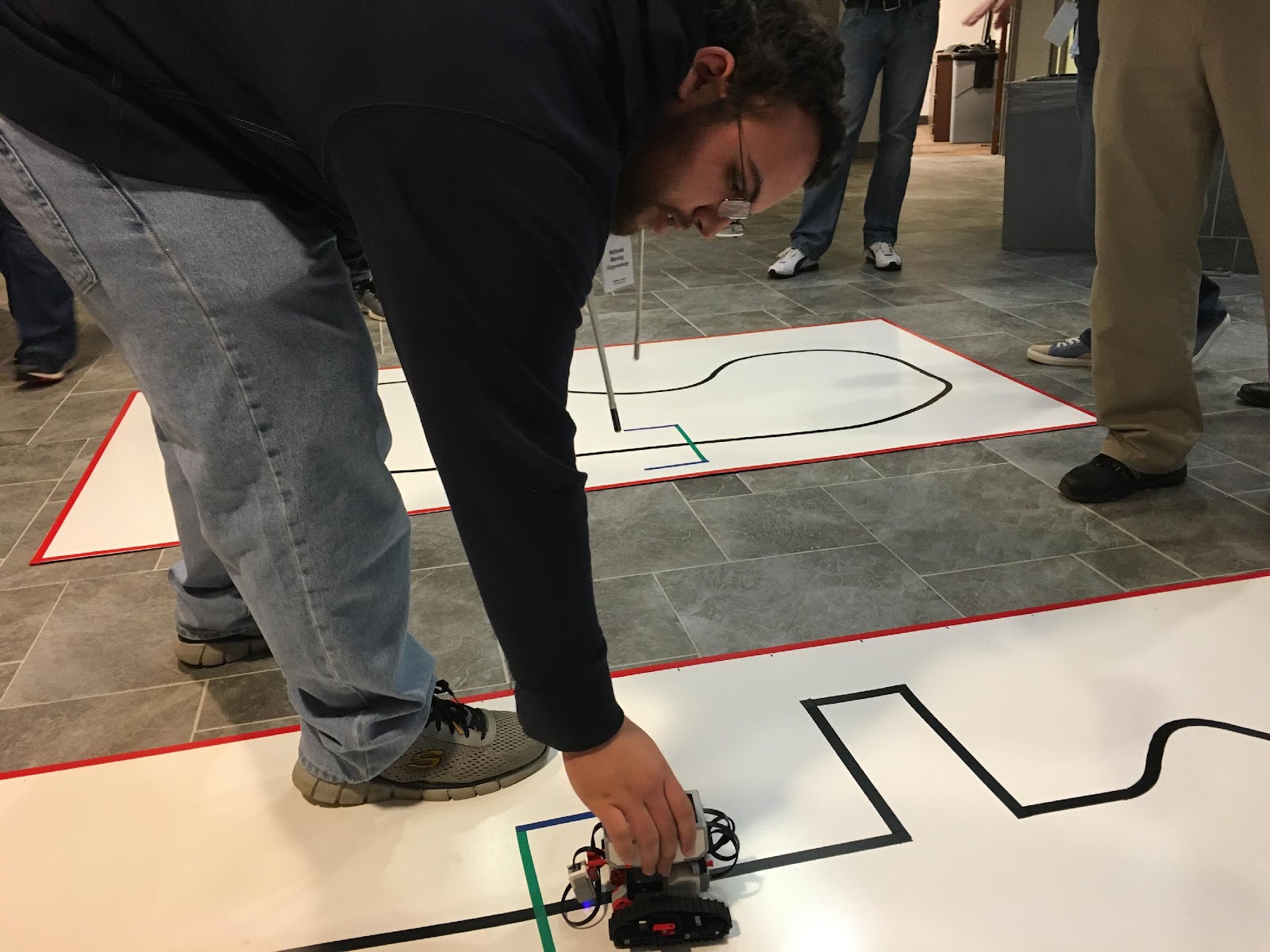 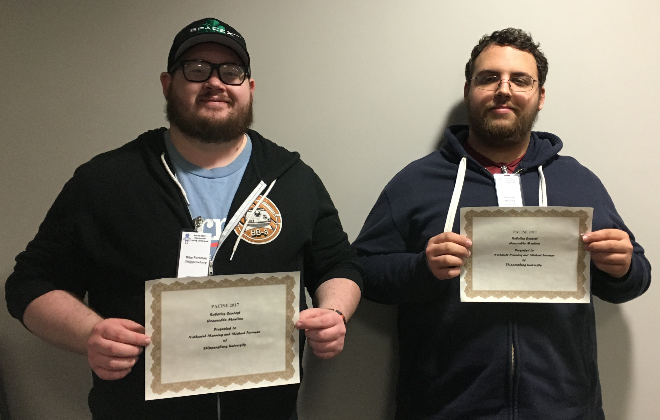 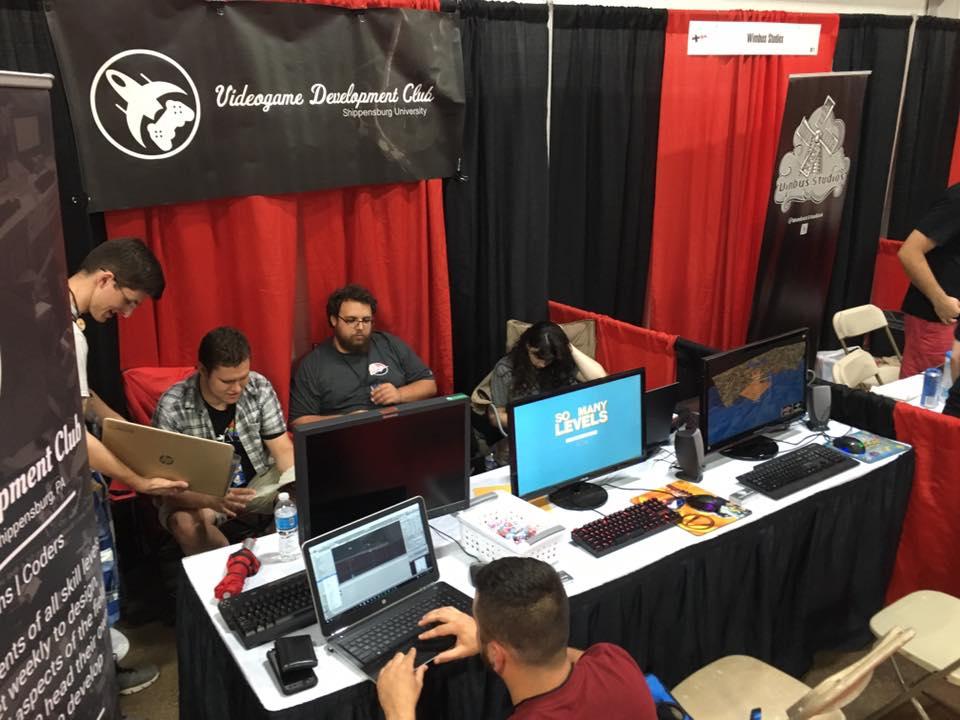 The following games were on display: BirdBall, So Many Levels, Pong3D, Platformer 1.0, and Clockwork Tower.

So Many Levels and BirdBall were built by Evan Schoenberger using the Unity engine.  So Many Levels was developed during the spring semester.  It is a puzzle game with an endless number of levels (presently capped at 10) where the player tries to navigate three overlapping mazes to reach the exit.  Bird Ball was mostly built over a 20 hour game jam and is a multiplayer game where each player is trying to hit as many birds as possible with a ball.

Pong3D was built using LibGDX by Dr. C. Dudley Girard.  It was developed during the spring and summer as project connected to the new Game Programming course that will be taught starting fall 2018.  In the game, you control a platform that helps guide a bouncing ball to take out targets within a maze. 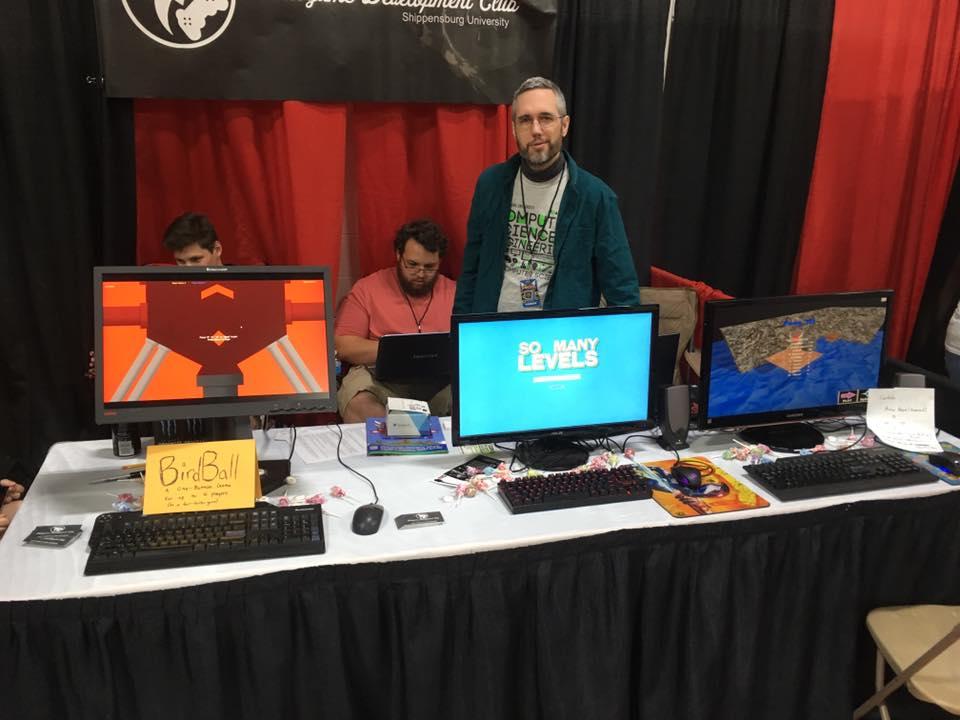 Platformer 1.0 is a Unity platformer by Trevor Kelly targeted towards android devices.  In the game, you control a character that is trying to get across the map, collecting objects as you go.  There are obstacles along the way that can cause you to explode.

Clockwork Tower is a Unity project being developed by Aaron Gerber and Nathaniel Manning.  Aaron has mainly focused on the art assets for the game while Nathaniel has mainly worked on the coding.  In the present form of the game you are a knight trying to take out as many enemies falling from the sky as possible.

While at the convention, we got to meet up with a number of alumni.  Zach Thompson, Will Fisher, Nick Hydock, Matt Hydock, Christian Cooler, Martino Dang, Gabriela Rocha, and TJ Dalious were all in attendance