Office of the President

Welcome to Shippensburg University! Our passion and commitment to student success drives us. Our students’ forward-thinking ambition motivates us. Together, we embrace exploration, curiosity, and discovery-based learning models that transform students into critical thinkers, preparing them for the challenges and opportunities that lie ahead.

Our student-centered teaching philosophy prioritizes learning through experiences both in and out of the classroom. The Minds@Work  student research conference, the Center for Land Use and Sustainability, the Brad E. Hollinger Stock Trading Room, the Fashion Archives and Museum of Shippensburg University, and the Grace B. Luhrs University Elementary School, the only public elementary lab school in the state, are only a few of the unique features of the University. These real-world opportunities prepare our students to be leaders in their community, profession, and evolving global markets.

Our faculty are leaders in their field with deep ties to a strong alumni network and industry partners. Academics are important, and all of our classes are taught by faculty who believe in innovation, personal attention, and transforming the lives of students.

Supporting personal growth is at the forefront of the campus experience and features an array of rewarding extra and co-curricular activities from leadership training, to e-sports, more than 150 campus clubs and organizations, and intramural team sports.

School pride abounds across campus and our students rally together in support of our nationally recognized student athletes who have earned more than a hundred Pennsylvania State Athletic Conference championships. Ship Raiders compete at the highest level, both on the court and in the classroom, on the field or conducting research. The Shippensburg University Marching Band has represented Ship across the country, and is our home field advantage that dots the “i” on Shippensburg. Our campus thrives, thanks to our Raider Pride.

The richness of our campus resources are matched by the richness of our surrounding community.  Located in South Central Pennsylvania’s lush Cumberland Valley with the Appalachian Mountains on the horizon, our Ship community has a safe, diverse, and majestic recreational landscape with vast natural resources to call home.

Our John L. Grove College of Business is home to another State System exclusive, the Bachelor of Science in Business Administration in Entrepreneurship. Leading the way is hallmark of Ship, and Grove College exemplifies this philosophy as the first in the State System to be internationally accredited by the Association to Advance Collegiate Schools of Business.

The College of Education and Human Services boasts one of only eight Bachelor of Science in criminal justice programs in the United States certified by the Academy of Criminal Justice Sciences.

Our College of Arts and Sciences is home to one of only three programs in Pennsylvania accredited by the Accrediting Council on Education in Journalism and Mass Communication. These accreditations round out the eleven total for the university including computer science, counseling, social work and teacher education.

Since 1871,  we have been a community of leaders committed to academic innovation and excellence. We embrace our past as the first state teachers college in Pennsylvania to be chartered and the first to be accredited by the Middle States Commission on Higher Education. Today, we celebrate 150 years in service to our community, enriching the lives of our students and driving the economic growth of our region.

A common refrain is that once you see and experience Shippensburg University you will want to be a part of the community. I think you will agree. So, I hope you will get to know us. There is so much to love here at Ship and I look forward to welcoming you to our Raider family.

Dr. Charles Patterson’s nearly two decades of service within higher education is diverse, having served as an instructor, dean, foundation executive director and chairperson, vice president for research and economic development, president, and executive within the U.S. Department of Education.

Previously, he served as the president of Mansfield University from July 2019- June 2021. Under his leadership, Mansfield University implemented strategic priorities resulting in enrollment and retention. Strategic enrollment initiatives were also successful in increasing first-year retention from 73 percent to 78.1 percent during an otherwise difficult pandemic year.

Prior to joining Mansfield University, President Patterson served as an executive in the U.S. Department of Education’s Office of Federal Student Aid (FSA), responsible for the development and execution of outreach and engagement efforts with higher education executives across the country and abroad. FSA provided more than $120 billion in federal grants, loans, and work-study funds each year. He also led federal programs focused on the identification of early indicators and development of risk management strategies that address financial stress among colleges and universities.

As interim president of Georgia Southwestern State University, Dr. Patterson led the university’s efforts to stabilize and grow the university's undergraduate and graduate enrollment resulting in a 10 percent increase in the student body during his tenure. He also led the development and implementation of the university's strategic plan, accompanying enrollment management plan, and increased marketing and promotion efforts to enhance institutional branding, enrollment, and fiscal sustainability. Dr. Patterson led fundraising initiatives, including the development of comprehensive campaigns, and has worked alumni, donors, and friends of the university to strengthen important relationships and increase giving. Results included a 75 percent increase in grant and annual giving in 2016 and a stronger culture of recurrent giving.

As the vice president for research and economic development at Georgia Southern University, Dr. Patterson had a direct role in shaping the institution’s identity and brand as the “Large-Scale, Small-Feel Research University” of Georgia and served as the chief advocate for expanding the university’s scholarly pursuits, representing the university’s priorities to federal and state granting agencies, foundations, and industry leaders. His efforts opened a $10 million (annual) pipeline to the university of industry-driven, applied research capabilities in forestry and advanced manufacturing.

President Patterson began his career in higher education at Baylor University. He held dual roles as both an instructor in the Honors College and within central administration. At Baylor, he served a direct role in supporting students and faculty in their research and scholarly pursuits and building the foundation for Baylor’s current aspirations of being recognized as an R1 research university.

President Patterson earned his Bachelor of Science degree in biochemistry from Mississippi State University and his Ph.D. in biomedical sciences from the University of Texas, Southwestern Medical Center in Dallas.

He is married to Colleen Patterson and they have one son, Aidan, and two very happy dogs, Oliver and Sweetie. 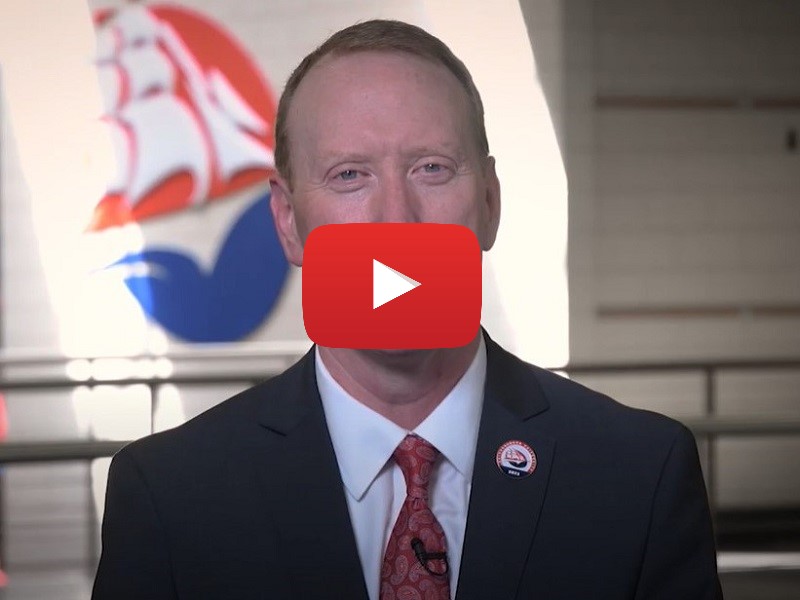 A message from the President: President Patterson thrilled to become a Raider

Get your SU Farm produce at Fountain Fridays