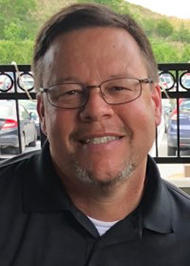 "Today's students are experienced media consumers before they arrive at Ship, so my role is to get students engaged and actively involved as producers and evaluators of media, and keep them thinking about the personal, professional and global impacts of the media they create and experience."

Dr. Carlin has worked as a media producer, writer, announcer, and videographer for radio and TV stations in Pennsylvania, Maryland, Ohio, Tennessee, and Texas. Dr. Carlin's areas of research include the new communication technologies of digital audio and video, media programming, and media literacy. Dr. Carlin also serves as the FCC-licensed station operator and faculty adviser to WSYC-FM 88.7/wsyc.org. Dr. Carlin was the C/J department chairperson from 2000-2009 and in 2017. Born in Nebraska and raised in Maryland, he is an avid Huskers, Orioles, and Capitals fan. He and his wife, Sulynn, have four children and live in Chambersburg.