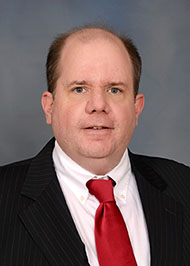 "The fields of journalism and communication are experiencing a profound transformation brought about by digital technology. Today’s students will be the trailblazers in this new environment. They must be flexible and creative thinkers who are prepared to deal with rapid change. At the same time, basic information gathering and storytelling skills are as vital as ever. The need for communication professionals who can help citizens make sense of the world has never been greater."

Dr. Kyle Heim joined the Communication/Journalism Department in fall 2015 as an assistant professor specializing in print and online media. Previously, he was an assistant professor of journalism and communication at Seton Hall University in New Jersey. Dr. Heim’s professional experience includes 15 years as a copy editor, reporter and assistant city editor at such newspapers as the Chicago Tribune, the Minneapolis Star Tribune and the Sioux Falls, S.D., Argus Leader. He also served for three years as the news adviser of the student-run newspaper at Penn State University. Dr. Heim’s research examines the influence of emerging social and participatory media platforms on the practice and content of journalism.