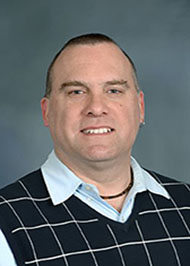 "Media is an evolving cycle. Not only must we remain current as teachers in the classroom, but we must also teach the next generation the latest tools and technology so students can remain competitive upon graduation."

Before starting in his academic teaching career, Prof. Lohrey worked as a production assistant at WKBW-TV (the ABC affiliate in Buffalo NY), wrote a bi-weekly film column in a small entertainment newspaper in Buffalo and assisted on various film and video shoots. While in college, he participated in the college’s radio station as a DJ.

His current area of research includes gender/sexuality issues in media and broadcasting.