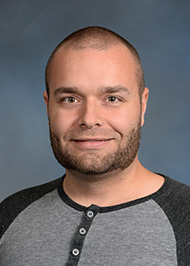 Dr. Kegerreis’ research group conducts theoretical chemistry research. We focus on using computers to ascertain important physical properties from chemical systems. Through collaborations with Dr. John Richardson, a set of research projects associated with the group have both a theoretical and a computational component to them, allowing student researchers the opportunity to experience both approaches to the study of chemistry.

Students within the research group write their own computer programs to study the quantum dynamics of chemical systems. Of primary interest is the development and refinement of Monte Carlo integration techniques that allow for the calculation of the thermal energies of equilibrated systems, as well as correlation functions used to study the time-dependence said systems.

Students interested in educational aspects of chemistry have also done projects relating to the translation of complex mathematical ideas into the physical chemistry classroom setting. Based on the use of a software package called Mathcad, work has been done translating Monte Carlo integration and Fourier Transform techniques into computational laboratory exercises, allowing students to get hands-on experience with such processes instead of treating them like a ‘black box’.

Collaboration with Dr. John Richardson has also produced an important vein of research. Together we like to look at the connection between analytical chemistry and physical chemistry, and we study systems that allow for the modeling of chemical systems, as well as the experimental determination of the properties of interest. Primarily, such work has been focused on gold and silica nanoparticles in gelling media.

Dr. Kegerreis has also collaborated with Dr. Dan Predecki on a project that studies the kinetics of important organic compounds called imines. Students work with Dr. Predecki to synthesize novel compounds, and then their decomposition kinetics is monitored via UV-Vis spectroscopy. Dr. Kegerreis then guides students on a kinetic study of the acquired data, which involves modelling, curve fitting via Mathcad, and elucidation of rate constant information based on the results.

Former Group Members and Their Designations

Family is important to me, so I spend my down time with my wife and 3 children (two daughters and a son). I enjoy playing soccer, and I belong to an over-30s team that perpetually wins the Capitol Area Soccer league. I follow Tottenham Hotspur of the English Premier League, but my favorite team is the United States Men’s National Team.