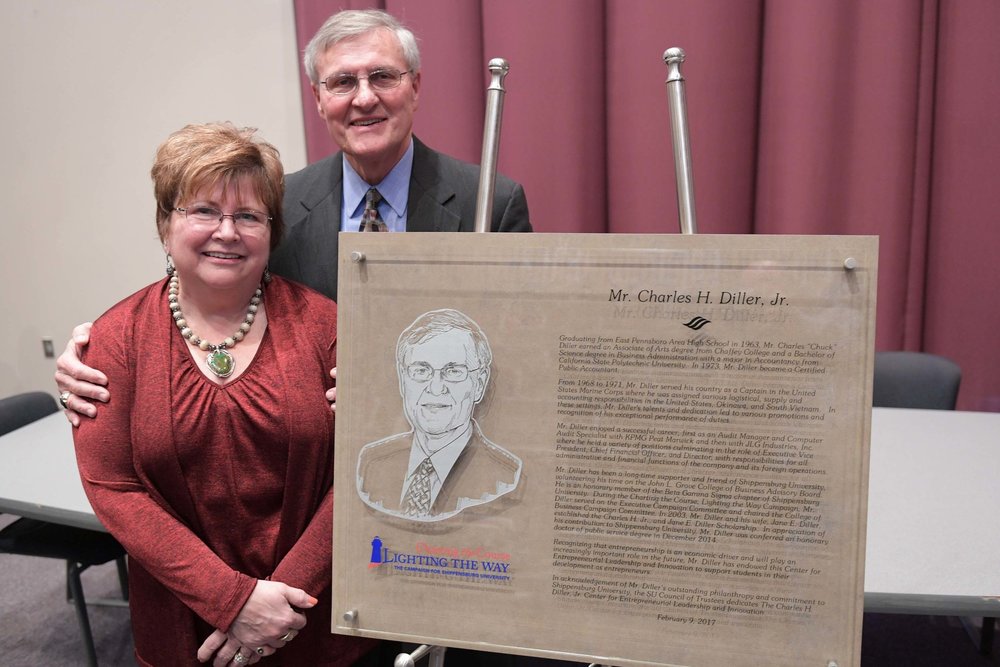 Charles H. Diller or Chuck as he prefers, is a 1963 graduate of East Pennsboro High School. Shortly after high school he moved to the West Coast where he worked for a year supporting himself and saving money to attend college. With the help of a part-time job, academic and athletic scholarships, Chuck put himself through college, earning an Associate of Arts degree from Chaffey College and then a Bachelor of Science in Business Administration with a major in Accountancy from California State Polytechnic University in 1968.

Chuck received the pinnacle of leadership training as an officer in the United States Marine Corps. After two tours in Vietnam, earning the Navy Achievement medal with Combat “V” and a certificate of Commendation for exceptional performance of duties, Chuck joined the accounting firm KPMG Peat Marwick where he worked from 1971 to 1977. He joined JLG Industries and received successive promotions until he became Executive Vice President, Chief Financial Officer and Director. In the early 1980’s, John L. Grove, founder and president of JLG Industries, made a request he could not refuse: to serve on Shippensburg’s College of Business Advisory Board.  When your boss’ name is on the building...you say yes. After a committed and successful career, he retired from JLG Industries in 2000 to focus his attention on his wife, Jane, who had been injured in a serious car accident the year before.

Chuck’s bond with the university continued to strengthen. In 2003, he and Jane established a scholarship with a first preference for students applying to the College of Business who are graduates of Mechanicsburg High School, which Jane attended, or East Penn, Chuck’s high school. The generous scholarship is not intended for the top students, but rather for the average student with potential, who, with some financial help, can succeed in college. “That was me--the average student. I know what it’s like to struggle to get good grades,” says Chuck. “But I also known how important education is and how difficult or even impossible it would have been for me to attend college without financial help.”

In 2016, their allegiance to the University was strengthened by a commitment to Charting the Course, Lighting the Way, the Campaign for Shippensburg University to endow and name the Charles H. Diller Jr. Center for Entrepreneurial Leadership and Innovation.  The Center complements the University’s newly established Entrepreneurship major and minor and provides additional funding for student competitions, speakers, entrepreneurship mentors, student organizations, seminars, conferences, and other opportunities.

“It is very relevant for today’s young adults, in whatever profession they choose, to learn to cope with risk, spot opportunities and have the ability to be innovative. That is why we chose to endow this Center as our contribution to the recent campaign,” said Chuck.