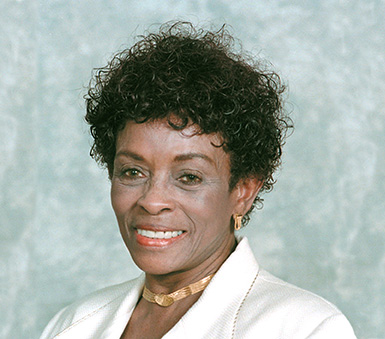 Dr. Elnetta Jones dedicated her life to making a difference in the world one student at a time. She believed in the mission of Shippensburg University, her Alma Mater, and made great contributions to public higher education. On September 9, 2016, in a celebration of her life and to honor her contributions as an educator, administrator, Trustee, SU Foundation Board member, benefactor, and volunteer, the Council of Trustees of Shippensburg University renamed the School of Academic Programs and Services, formerly known as the Division of Undeclared Majors, the Elnetta G. Jones School of Academic Programs & Services.

She joined Shippensburg University as an administrator and educator in 1972, for an influential career that lasted 27 years, retiring in 1999 as Dean of Special Academic Programs. She provided leadership and direction for SU’s ACT 101 Program to assist under-prepared students in transitioning to college. She also developed programs to retain students, such as the Martin Luther King Academic Retention Program and the Learning Assistance Center. Dr. Jones was instrumental in establishing the Division of Undeclared Majors in 1984, which was recognized by the Commission on Higher Education of the Middle States Association of Colleges and Schools in 1989, when it was recommended as a campus model. Her academic advising program for the Division of Undeclared Majors won an award for excellence in 1993 and earned the Noel/Levitz Retention Excellence Award in 1995.

Dr. Jones served for six years on SU’s Council of Trustees and on the SU Foundation Board for 14 years. She was a valued benefactor and a dedicated Annual Fund volunteer, and she was presented the Alumni Association’s Exceptional Service Award in 1998.

Throughout her career, Dr. Jones worked on behalf of students who needed extra assistance and encouragement to transition from high school to college and to maintain the grades necessary for academic success and graduation. Thousands of students benefited from her direct intervention, persistence, and mentoring. Most of the programs she helped establish are still in existence today.  In recognition of her significant contributions to Shippensburg University, the Dr. Elnetta G. Jones Scholarship was established in 1989, benefiting entering freshmen enrolled in the Division of Undeclared Majors. The scholarship was supported by her many friends, colleagues, and former students, and honors a woman of great integrity, vision, and compassion.