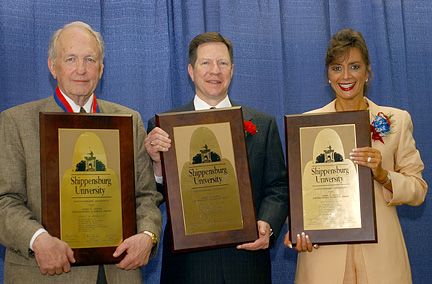 Ernest Brindle began with service to his country during World War II as an aerial navigator earning the Distinguished Flying Cross. After his graduation from Ship in 1947, he earned his M.B.A. at the Wharton School in 1949. He then spent more than three decades with Standard Oil Company and its subsidiaries in increasingly complex financial executive positions. Ernest retired in 1984 as assistant treasurer of Standard and treasurer of its major subsidiaries (Amoco Production, Amoco Oil, and Amoco Chemicals). Since then his local community has benefited from his expertise, including the AARP tax program, his church,
and the City Light Development Corporation (a non-profit housing development). Ernest didn’t forget Shippensburg. He has been a steadfast volunteer with the annual fund including its co-chair 1991-93 and served on the General Alumni Association Board. In 1994 he was honored with SU’s Exceptional Service Award.

Moving every two or three years has allowed Chaplain Jeffry Dull, a lieutenant colonel in the U.S. Air Force, to be of service to thousands of military men and women and their families. His ministry is marked by his unfailing responses to the needs of his community including disaster relief and support groups for single parents, minorities’ freedom of
speech, and women’s rights. His technical expertise resulted in tying the many chaplain offices and locations by computer long before the Internet became a household word. He has served in 12 countries and has selected all religious programming for Armed Forces radio and television serving the military overseas. Jeffry has been rewarded for his service with five Meritorious Service Medals and early promotions. After high school, Jeffry spent the next ten years earning his bachelor’s and two master’s degrees before joining the Air Force. He is also a commercial hot air balloon pilot.

After several years in marketing Bonita Hathcock found her niche in human resources. Using Siemens AG as a first stop, Bonita began what has become her nationally recognized style of innovation and improvement as vice president of human resources. There she centralized functions resulting in $21 million in savings with no loss of employee satisfaction. Her next stop was United Airways before she reached her current position as senior vice president with Humana Inc. one of the nation’s largest health care providers. Keeping service to both the company and its employees in mind, Bonita is able to change
the corporate climate with positive results. While technology is a factor in her success, recognition of accomplishments, cultural differences, and employee rewards also contribute. Bonita’s involvement with professional organizations includes serving as a board member for the Metro United Way, Fund for the Arts, Employment Policy Foundation, and the Human Resources Planning Society.

People in Poland have benefited from the efforts of William Minsker for almost 15 years. William founded Pennsylvania Partnerships Abroad, Ltd., a non-profit humanitarian organization. PPA, Ltd. provides internships for Polish master’s degree students here in central Pennsylvania, a teacher exchange program, assistance programs to help Polish educational and medical institutions, fire services, and orphanages. William splits his time between the two countries, teaching the second semester each year at the National University of Economics in Wroclaw. He retired from teaching in the Lower Dauphin School District in 1992 to devote his energies to PPA, Ltd. When William is in Pennsylvania, he is active in a number of community activities including the Linglestown Fire Company, the Lions and Kiwanis Clubs, and the Hershey Community Orchestra. He is a phonathon volunteer and an alumni admissions counselor, too.t